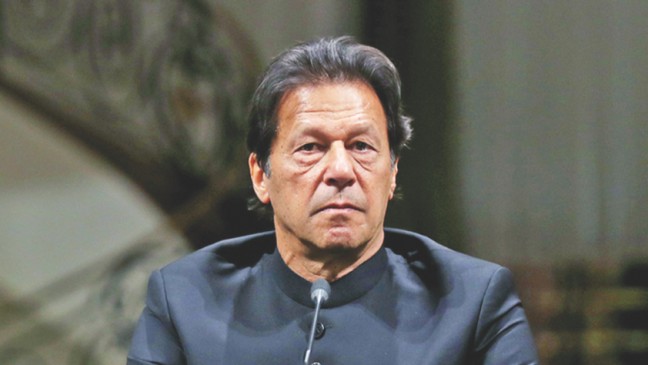 The United States embassy in Islamabad on Wednesday apologised for retweeting an “unauthorised” post about the premier by PML-N leader Ahsan Iqbal after it sparked outrage on social media.

“We have one in Pakistan too. He will be shown the way out soon,” Iqbal said in his tweet, in what was an apparent reference to Prime Minister Imran Khan.

The sharing of Iqbal’s tweet by the US embassy’s Twitter account quickly sparked outrage, as government officials, including a federal minister and the Sindh governor, called upon the embassy to respect diplomatic norms and issue an apology.

“The US embassy Islamabad Twitter account was accessed last night without authorisation. The US embassy does not endorse the posting or retweeting of political messages. We apologise for any confusion that may have resulted from the unauthorised post,” the embassy said on its Twitter account.

The whole saga started after Iqbal on Tuesday posted a screenshot on the social networking site of an article by The Washington Post titled “Trump’s defeat is a blow for the world’s demagogues and dictators”.

The hashtag #ApologiseUSembassy also started trending on Twitter on Wednesday.

“Account was clearly not hacked so someone who had access to it used it ‘without authorisation’. Unacceptable that someone working in the US embassy is pushing a particular political party’s agenda,” she said.

“US embassy still working in Trumpian mode in support of convicted absconder and intervening brazenly in our internal politics,” Minister for Human Rights Shireen Mazari said before the embassy issued an apology.

“Monroe doctrine also died centuries ago! US embassy must observe norms of diplomacy,” she said.

The minister also expressed her dissatisfaction with the apology issued by the US embassy.

“This is utterly absurd, how can the US embassy retweet something containing derogatory remarks against our premier? This is against diplomatic protocols. An apology is needed with immediate clarification if fake or hacked,” he said.

Special Assistant to the Prime Minister on Political Communi­cation Shahbaz Gill said it was the first time ever an embassy was seen “insulting” its own lawfully elected president. “We expect some heads must roll. This is unacceptable!” he said.

Azhar Mashwani, Punjab chief minister’s focal person for digital media, questioned whether this was how US embassies under State Secretary Mike Pompeo would behave for the next two-and-a-half months.

Head of PTI’s Digital Media Wing, Imran Ghazali, had also demanded an apology for the “embarrassing and disrespectful tweet” from the US embassy’s account.