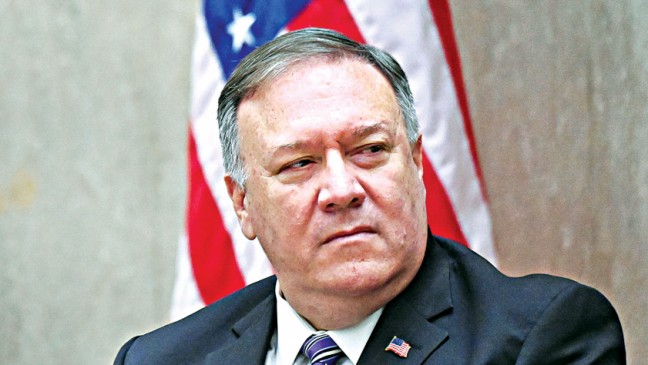 Facing criticism, US Secretary of State Mike Pompeo softened his tone after he voiced confidence that once every “legal” vote was counted, it would lead to a “second Trump administration.

Chuck Schumer, the top Democrat in the Senate, said Pompeo was out of touch with reality.

“Secretary Pompeo, Joe Biden has won. He’s won the election. Now move on,” Schumer told reporters. “We have a Covid crisis raging. We don’t have time for these kinds of games.”

“Secretary Pompeo shouldn’t play along with baseless and dangerous attacks on the legitimacy of last week’s election,” he said.

Richard Boucher, a retired diplomat who was the longest-serving State Department spokesman, said Pompeo’s comment about a second Trump administration could be passed off as a joke but also served to protect him from White House criticism.

Hours after withering criticism over his comments, Pompeo, a close ally and appointee of Trump, in a Fox News interview appeared to soften his tone.

“I am very confident that we will have a good transition, that we will make sure that whoever is in office on noon on January 20th has all the tools readily available so we don’t skip a beat with the capacity to keep Americans safe,” Pompeo said.

Earlier at a State Department briefing, he said: “There will be a smooth transition to a second Trump administration.”

Those comments drew praise from Trump, who tweeted a video late on Tuesday of Pompeo’s comments, saying: “That’s why Mike was number one in his class at West Point!” referring to the US Military Academy.

Biden said earlier that nothing would stop the transfer of power in the US government. The former vice president secured more than the 270 votes in the Electoral College needed to take the presidency by winning Pennsylvania on Saturday.

But Trump and his allies insist “illegal” ballots may have been cast despite no evidence of mass voter fraud, which is extremely rare in US elections.

Pompeo did not make any comments in either set of remarks to suggest he recognized Biden as the president-elect.

Asked during the Fox News interview if he was being “serious” regarding his comments about a “second Trump administration,” Pompeo did not say either way but did not repeat the phrase.

He spoke as leaders of other countries, including Washington’s close allies the UK, France and Canada, have already congratulated Biden.

In his first official travel since the election, Pompeo is due to go to France, Turkey, Georgia, Israel, Qatar, the United Arab Emirates and Saudi Arabia from Nov. 13 to 23. The leaders of some of those countries have already congratulated Biden.

Trump has fired his defence chief on Monday, in a sign that experts say may be a part of a tactic that might come useful in case of wide scale unrest in US over the election outcome.