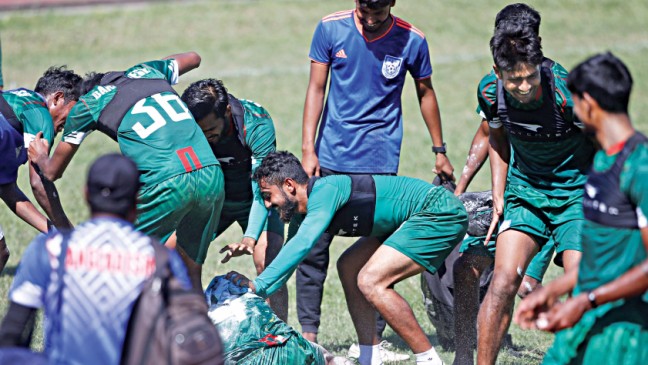 With a day to go before the first friendly against Nepal tomorrow, the Bangladesh footballers — who started training less than three weeks ago — seem happy with their fitness, but Australian fitness trainer Ivan Razlog believes it will still take some time to become fully fit.

“We had started training with the friendly matches of November 13 and 17 in mind. We are more or less 90 to 100 percent ready to play the first match. The fitness levels of the players have improved significantly, along with the mentality. So, we are expecting a good result tomorrow,” said centre-back Tapu Barman after a two-hour training session at the Bangabandhu National Stadium.

“Whatever deficiency we have at the moment, we can overcome it if all the players can give their 100 percent on the ground, and I believe the 10 percent gap will have no impact,” said the long-serving Tapu.

The charges of Jamie Day started training on September 24 under local coaches before the British coach took charge on November 1, while the Australian fitness trainer has been working for just four days since joining the team on November 7.

“The players have been positive during training and they have been training well and positively. We can say after the friendly game how they are, and it will take time. They are very good in training and have been very positive in the short time since I have been here,” said Razlog when asked about the players’ current level of fitness.

Razlog may want to be noncommittal on the players’ fitness after just four days, but the booters at the camp seemed to be very energetic in their short run, passing and positioning drills after a half-hour stretching session. It was also seen that coaching staff used fitness monitors to gather key information about the players ahead of tomorrow’s match.

“Our fitness level is much better than when we had started. It was possible because of the training schedules the coaches set and which we followed at home during the coronavirus [shutdown]. That training is now helping us to regain our fitness in the national camp. So, we are hopeful of doing well in the match,” said left-back Rahmat Mia.

Head coach Jamie was also seen working with a set of players in a bid to settle on his playing eleven, which feature one or two new faces, but the 41-year-old coach generally wants to continue with proven players for the rest of the eleven.

“After dividing the players into two groups, Jamie has worked technically and tactically with us. So, I think he has a playing eleven in mind and he also worked on it today,” said Tapu.

Rahmat said, “All the players in the squad are good and anyone can secure places in the starting eleven because the calculation of old or new won’t work here; instead, the performance of the players in practice will be play the key role when picking the eleven.”

Tapu and Rahmat both believed that the lack of a practice match has been the only shortcoming in preparation, but were happy that they improved physically and mentally for the matches against Nepal.