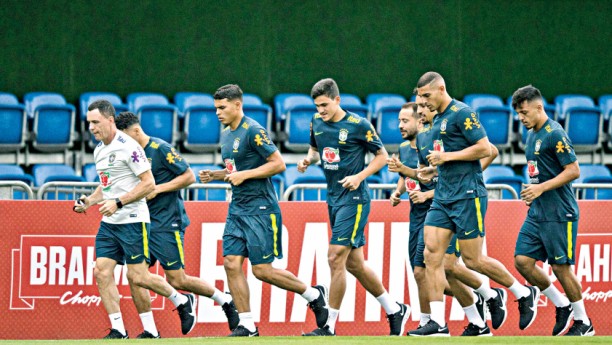 Brazil must confront a growing injury list that includes star forward Neymar as they resume World Cup qualifying this week, while Argentina are out to extend their perfect start at home to neighbours Paraguay.

Brazil host Venezuela in Sao Paulo on Friday (Saturday morning in Bangladesh) chasing a third win in as many matches after launching their Qatar 2022 campaign with victories over Bolivia and Peru.

However, Brazil coach Tite will be without Neymar after the world’s most expensive player injured his thigh while on Champions League duty. Neymar, 28, bagged a hat-trick in a 4-2 win in Lima last time out to surpass Ronaldo as Brazil’s second leading scorer in history. His tally of 64 goals leaves him 13 shy of Pele’s record.

Despite his latest setback Neymar will still travel with the squad amid hopes that he may recover in time for the trip to Uruguay on November 17.

However, national team coordinator Juninho Paulista said Tite told PSG sporting director Leonardo that he “would never risk a player’s health”. Defender Thiago Silva has tightened up the Chelsea defence since his arrival in England, but the 36-year-old has warned the crowded global fixture list is taking its toll on players.

“You have to keep endlessly reinventing yourself. We’re losing players infected by Covid-19, or others who get hurt because we’re playing too many matches.

We’re not machines,” he said.

“We saw recent studies showing it’s more than likely you get injured after four or five matches come one after another (every three days). It’s very worrying for us.”

While goalkeeper Alisson Becker and forward Gabriel Jesus return after injury, Brazil will also be without Casemiro, Philippe Coutinho and Fabinho.

Argentina, who began qualifying with narrow wins over Ecuador and Bolivia, are hoping Lionel Messi will be fit for both their games against Paraguay (On Friday, Bangladesh time) and Peru.

The Barcelona forward is said to be nursing a sore ankle, leaving Argentina coach Lionel Scaloni considering his options if his captain is unavailable.

Paulo Dybala is again missing from the squad along with Sergio Aguero, although Angel Di Maria has been recalled for the first time in over a year. Lautaro Martinez will likely start up front while super-sub Joaquin Correa could be rewarded for his winning goal in the altitude of La Paz.

Lucas Alario has also forced his way into contention after scoring seven goals for Bayer Leverkusen in his past four Bundesliga appearances. Uruguay meet Colombia in Barranquilla on Friday (Saturday in Bangladesh) attempting to bounce back from last month’s 4-2 loss in Ecuador.

Luis Suarez is the joint leading scorer in qualifying with three goals, all of them penalties, carrying over his form from club level with Atletico Madrid.

Real Madrid midfielder Fede Valverde is out with a fractured shin and Maxi Gomez is absent due to a knee problem for Uruguay.

Last year’s Copa America runners-up Peru on Friday (Saturday in Bangladesh) play Chile — the country that won the tournament in 2015 and 2016.

Both nations are looking to breathe life into their qualifying bids in Santiago after collecting just a point from the opening two rounds.